We have had a busy weekend with myriad’s of people coming and going, the weather has proved to be very trying – excessive winds, heavy rain, slippery roads that vehicles have had to be towed up. We were warned by the forecasters that storm warnings were in place for Saturday night so we were semi prepared. However the rain came in earlier so some folk had interesting times just getting here. The rain eased back mid afternoon Saturday and finally cleared and we only had the high wind gusts to endure during Anson’s party.

Tim took a crew out fishing in the morning – they arrived back rather wet! Anson and my bro Duncan got the spit roaster going and started to prepare the hangi. When Paul arrived back from fishing he got the hangi going properly. A hangi is the traditional way the Maori cook their food. You dig a deep pit and then light a fire in the bottom with hot burning wood. You then use either iron or rocks on top. They absorb the heat and once the fire has burned down to ashes you then put the prepared food into the baskets – either wire or woven flax – you then cover it all with a sheet or woven flax mats and cover the pit in with the soil and let the heat cook the food. It only takes a few hours. We cooked mutton, pork, chicken, kumara, potatoes, pumpkin and cabbage.

By about 4pm most people had arrived so after admiring the birthday cake which Jesika had made to represent Anson hunting in the mountains,

we started moving down to the woolshed. We had dips and chips and drinks to begin the festivities along with a lolly scramble for the youngsters. They had to compete with the wind to catch the lollies! 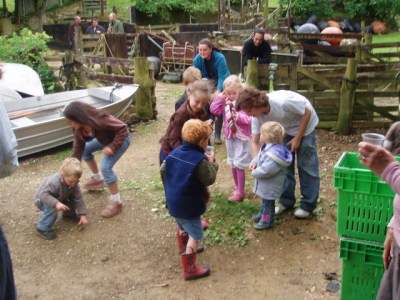 Next on the evenings entertainment was the speed shear.

It was a lot of fun because despite only having Anson & Paul there as professional shearers and Tim & Duncan as the still functioning antique shearers (there were a few other non-functioning antique shearers who were very happy just to watch!) Once they got up and shore a few sheep then other folk decided to give it a go to. So many city slickers had lots of fun trying to work out which end was up. They all really enjoyed the experience and challenge.

We then cranked up the deep fryer and barbecue. Alan and Eare (Nuana’s parents) produced copious quantities of hot chips and Herb & our neighbour Peter cooked the hamburgers.

There were mussels and oysters and hot-dogs along with the spit roasted pig and the hangi tucker. All in all it was a great feed and everyone enjoyed it. 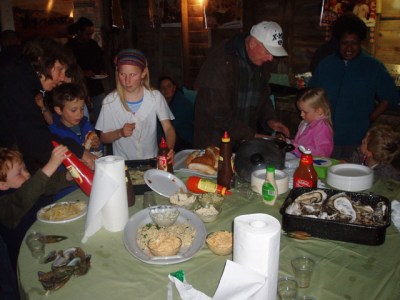 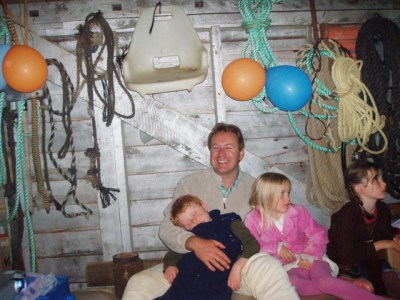 Brianna had put together a computerised photo display of Anson’s life which played on a large sheet billowing against the shed wall in the breeze. That was fun. Then Tim & I made a speech – Anson tried to reply but was rather overcome with it all. The cake was brought down and they cut that and we all ate dessert – ambrosia, jellies and cake – yummy. 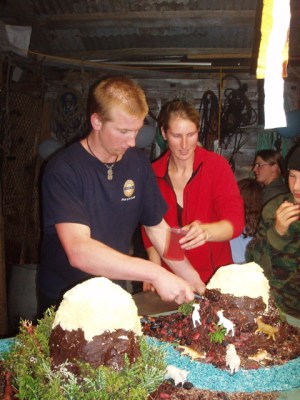 Most folk had gone by around 11pm so the rest of us came up to the house for coffee. Tim & I took quite a while to sort out and put away left over food – there was so much. Bed was very welcome at around 1am.

I woke next morning at 5:45am and found Anson & Herb still out in the living room – they had continued the party up in Anson’s caravan with a few other young folk and had not bothered going to bed! Oh to be young and crazy.

Sunday was wet, Cat had work. The memorial unveiling for Tim’s parents was canned because of the weather – way to yucky and dangerous to be walking up to the top of the hill. Everyone else just cruised, ate, socialised – those that needed to caught up on sleep, people started leaving to go home. Leftovers for dinner.

Monday was wet again – great for the farm but not too good for the roads. Tim had to tow a few folk up the road – it was worse because he had been bulldozing and then all the excess traffic had really turned a few spots into quagmires.

Nathan was the man of the moment – he actually forgot it was his 11th birthday until Nuana reminded him. His day was much quieter and laid back. Jesika cooked a Mexican meal for lunch but by the time she got it over here it was closer to dinner which was great, we didn’t have to cook dinner

He was thrilled with his camouflaged sheets I had bought for him in Utah from Cabella’s. We had also gotten him a cool book about Pirateology and a premier boxed set of RISK. His favourite board gave. 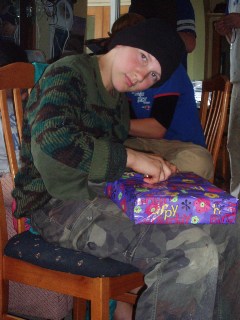 Ella and Grant were the last ones to leave with their 5 young ones.

We then got the young folk to bed and crashed out in front of a movie. Tried to watch Fried Green Tomatoes but the CD was damaged so gave up and watched The Joy Luck Club. It was good – a fairly intense movie about mother/daughter relationships based on Amy Tan’s novel revolving around 4 Chinese mothers and daughters in San Francisco and China. We all should have gone to bed early but blobbing seemed like a good thing to do!