Came out to the kitchen and look what we found sitting outside the front door!

Cat & Mike had gone possum shooting. They only took a .22 rifle and no knife. Never expected to see a deer. An absolute crazy miracle but Cat managed to drop it with several shots of the .22. Then they had to get it into the car – it was massively heavy as they had no knife to gut it with. It was a 14 pointer. Man, that girl is tinny!

Last day of shearing – yippee! We thought it would run into tomorrow morning but Anson did well and a total of 1139 sheep were shorn in the 3 days. I think we all earn a sleep in tomorrow!
Here is a bit of wool shed activity – the blur indicates action-!! Anson is shearing on the right hand stand and Matt is crutching on the left. Josiah is on the table and Yuji is clearing the wool for Anson. 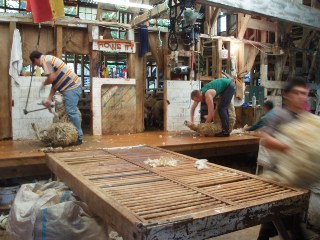 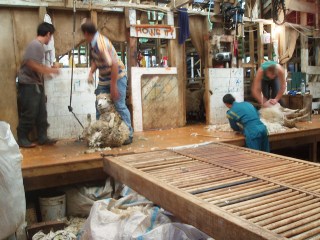 Cat has finished the vanity so she and Mike took it up to Waterfall Bay in the dinghy this morning. 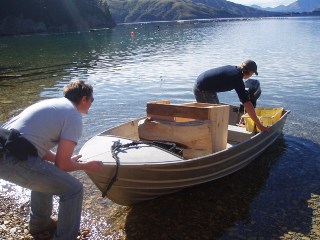 It will look even better once it is oiled. Jesika commented to Cat that it looked so good in the bathroom that she was tempted to stay on – but as she can’t live in a bathroom I don’t think that will happen

The builders came in and got the bathroom functioning which is great as it looks like Jesika could have a busy time with guests over the New Year.

The mailboat came after lunch and bought a huge box of stuff for me. Azzan decided it would make a great hut and then the girls got in on the act and they found several more boxes and ended up creating a monster hut in the lounge.

It came in quite cold again so I got Nate to light the fire – but there is always interesting things to read in the old newspapers!

We got a rather upsetting letter in the mail and it really threw me for the rest of the day. Also got news to hear an old friend had just died. So I ended up doing not a lot. Tend to malfunction when I am an emotional basketcase

Anson had bought the DVD of ‘Over the Hedge’ so we all watched it tonight. But the fire was so warm and cosy and I was weary so I think I slept through most of it. Maybe I will have to watch it again in the morrow with the younger ones.

2 thoughts on “Shearing is finished – yippee!”