Tim & Anson went out for an early muster this morning. Cat & Yuji zipped out to pull up the net. Then they and Josiah spent an hour or so filleting the 26 kahawai that were in it! Cat then got Yuji & Josiah shovelling sheep manure from under the woolshed into bags to be taken over to Waterfall Bay to build up the garden.

When Tim & Anson got home I suggested that they give Nathan a game of Risk. He had gotten a classic set for his birthday back in November but hadn’t played a game yet. Anna joined in and the game monopolised the rest of the morning. In fact we all had lunch around them. Shannie & Azzan had fun making words with the Masterword game. 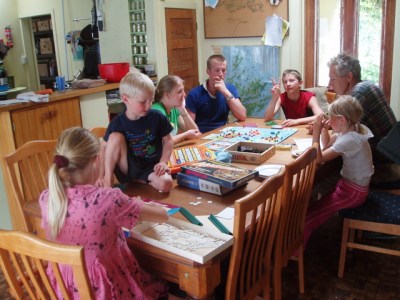 My friend Cathy & her dh Maurice arrived in their trailer sailer ‘Sirocco’ and we had a lovely cruisy afternoon catching up. Cathy and I shared a room in a Christchurch hostel back in 1975, so we go back a loooooong way. Maurice and Cat spent time talking yachts and checking out ‘Alibi’. Cat is finding that anyone with a yacht is only too happy to share knowledge so she enjoys picking their brains.

Brianna, Granny (my Mum) and friend Sarah arrived just after 5pm so we all sat down to an early dinner. It was fairly raucous and much hilarity went on. Anson took off out to work and then soon after Cat & Seb left for Golden Bay. 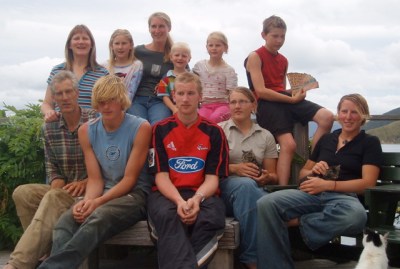 Before dinner we grabbed a few moments to capture the nearly entire family for the record. Only Sunniva was absent. As anyone with a mulititude of children knows – it is jolly difficult to get a photo with everyone looking good. So this is the best we can do for now. I have more on Anson’s camera but I can’t figure out how to get them onto my computer at the moment. Maybe tomorrow!

One thought on “Family times”