Azzan wanted to play with the play dough this morning so I got it out for him.
He was standing on a chair at the bench asking Mahalia to get him the ‘flatter’.
Can you guess?
Only a mother could know this one – the rolling pin!!
Very logical – it flattens the dough 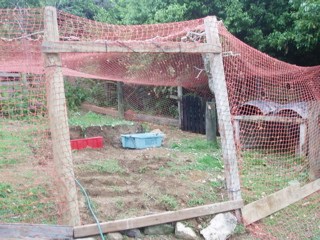 Brianna had the crew up in the orchard this morning finishing off the chicken run and house for Shannie’s chooks. It’s basic but has all they need. And most importantly – it should keep them out of the garden – Cat was threatening to put them in the pot if they pulled anymore plants out.

Tim & Ben have been working on a 2nd hand stove Tim has had stashed for a while. Hoping it will fit into the Croft. Ritchie & Tash have decided to move to town now and won’t be renting the Croft. Good move for them, but sad we won’t have them as neighbours.

Granny gave us ‘The March of the Penguins’ and the little folk were watching it this arvo. Azzan got a bit bored with it and instead of leaving began creating a nuisance. So Tim removed him and they had some story time instead. Tim was reading ‘Henny Penny’ (Chicken Licken) and decided it was a stupid story because it was so repetitive – but was shouted down by Azzan who likes that story and three women who know things like ‘that’s how children learn to read’!!! 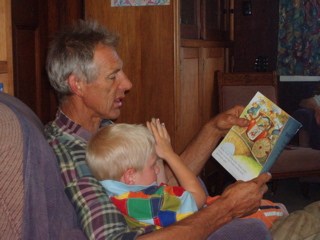 The weather has improved steadily as the day has gone on. Don’t think it will last for long though – the forecast is not too hot. Sounds like we may be getting a late late summer and now while most folk are trying to holiday it is very changeable and yucky.

We managed to finish dinner early and get the little ones to bed so we could watch ‘Seven Years in Tibet’. It is a long film but really good. Just after it had begun we got a phone call from Marlborough Marine Radio wanting us to go check out a yacht as it appeared abandoned. So Tim & Brianna shot over in the dinghy. As Tim had surmised the folk on board had had some motor problems and had gone off on another yacht to get help/parts. They arrived back at the same time as Tim got there. The major problem was they were on someone else’s mooring and they were not happy chappies. Anyway, end of drama – Tim got back in time to see the last half of the movie.

When I opened the curtains at the end I found two wee faces looking in expectantly. Tim found some meat for them and they are now very contented kittens.

It is so glorious out tonight. There is just a light breeze and I can hear the sound of the boats lapping at the wharf. The sky is clear and the stars are out and twinkling and the lights from the boats moored around the bay are shining. A tranquil picture uncaptured by film but imprinted on my heart. I so love living here.