We all had a busy morning getting the place tidied up.
It was a gloriously, beautiful day.

Cat, Anna & Eric left Sat night to go climbing for a few days.
Tim went mustering early.
Nathan & Alex cleaned the spa – much needed as it was getting pretty yucky.
Seb came and went from Waterfall Bay – as is his usual pattern these days.
Eva & Sabine cleaned The Croft, Alex & Anson finalised The Cottage.
We had a large group coming in to both places.
I made a large banana cake in anticipation of hungry hoards.
Bri & Sabine went sailing with Charlotte for the rest of the day.

Then around 2pm all my cousins arrived.
Sally & Tony, David & Justine, Peter & Conny and their 10 children.
We enjoyed a lovely afternoon together.

Tim took some of the crew scalloping for a couple of hours.
The ladies and I spent our time with the younger children to and fro the beach.
It was an idyllic day. 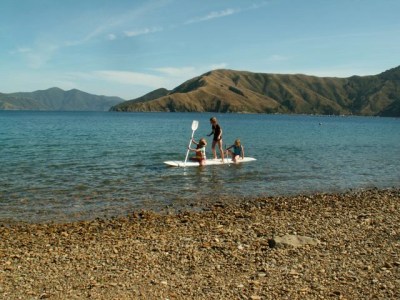 Then around 6pm the boat returned with a good haul of scallops and mussels. 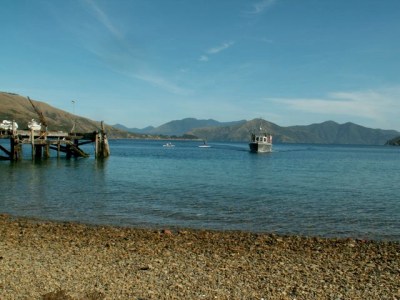 Seb had bet Eva $10 earlier in day that she couldn’t get Anson in to the water for a swim.
It is very rare that he will go swimming here.
Not that he cannot swim, he just chooses not to inflict cold water onto his body.
Anyway, Seb lost his bet-!!
I don’t think he budgeted on Eva’s coercive nature

How’s this for a perfect swan dive?? 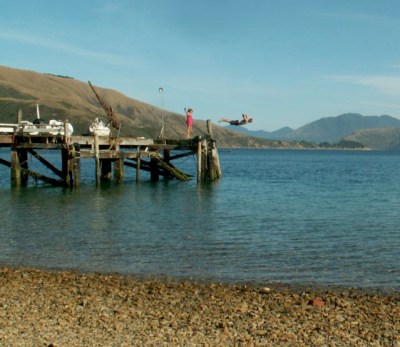 David & Peter rounded up their families and headed back to French Pass so they could get them settled for the night.
Sally & Tony stayed for dinner.
It was rather gourmet.
Scallop mornay, fried scallops, salad, rice, sausages (for those heathens that don’t do scallops-!!) and boiled peas.

By the time the guys had talked with the tourists, and then opened the scallops dinner was quite late when we ate.
Azzan actually asked me if he could go to bed.
Poor wee man was so tired.
It was after 9pm before Sally’s crew left for home.

I was walking back down the hill in the dusk light when I saw a long lanky figure on the house roof. I thought Tim had beaten me down the hill and must be trying to fix a chimney or something.
Then the figure stood up and began walking along the ridge of the roof and I realised it was Seb!
I guess 17 year olds will do anything for entertainment won’t they!
I told him in no uncertain terms to get down off the roof – and he did

One thought on “A lovely cousinly day”