I am feeling rather weary tonight.
It has been a busy day.

It was a bit chaotic getting the wwoofers organised this morning.
Tim had to be in 6 places at once.
He was finding meat for dinner, juggling vehicles, getting buckets and spades and trying to head out on the hills to muster sheep.
While we waited for him they helped get all the veges cut up for the stew for dinner.
But finally they were all delegated their jobs.
Bernadette gravelled the Cottage path and finished the gardening down there.
Chi spent all day cleaning the Terrano – man these vehicles aren’t going to know themselves – they are sooooo clean!
Nicholas helped Tim with sheep work.

The guys in the Cottage waited for their family to arrive in another boat to tow them home.
Tim got the sheep down and during the afternoon shore some of them – of course the three wwoofers all had to have a go

Ella & Grant came around before lunch.
It was rather a busy lunch table with 17 of us squeezing around it. We did send some of the children out onto the deck to eat in the sunshine.
All the soup got eaten so Ella spent the rest of the afternoon making another huge pot of pumpkin soup for me which was a real blessing.
She was reminiscing the whole time she was working in the kitchen – it didn’t feel that many years ago that she was living here as a young single girl working for me when I had little three girls underfoot – now she has 3 little girls underfoot (plus the 2 older boys of course).
Actually it must be around 24 years ago she came to live with us – doesn’t time fly!

Grant took Eli and and his wee friend Jayden fishing off the wharf – Eli was so proud of his fish, a large leather jacket.
He took it home to fry up for his dinner. 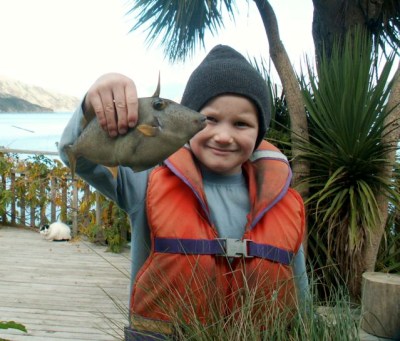 Seb got some school work done – not quite enough for his mother’s liking but at least it is a start.
He has been offered a full time job with another mussel company – it is a trial week first beginning in Havelock at 5am. So he is going to go out Sunday and sleep overnight on the boat – at least that way he won’t be late for work!
It is a much bigger boat and way better organised and he works regular hours – 4 days on 3 off.
If he passes muster than he will be offered a 3 month contract so that would be great.
NZ Greenshell mussels are a huge industry here so there is any amount of work out there if you are prepared to get out there and do it. Cat is the only female employed that we know of working on mussel company boats.

Shanni & Hali spent most of the afternoon entertaining Eden and the twins.
First they played schools, but Azzan wanted to do it for real and got upset cuz Eden was taking his books.
Then the girls found a great way to occupy the two busy wee ladies. 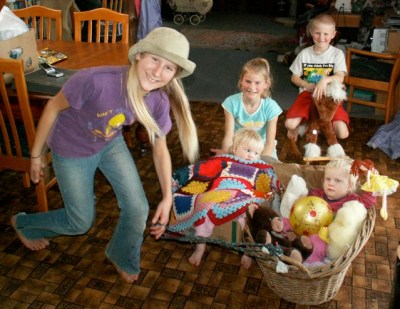 My old washing basket and a banana box proved to be great sleds as the towed Brianna & Ava round and round the living room.

Hali commented that – ‘it is really easy to make babies happy – you just smile at them and they smile back.’
To which Shanni very knowingly replied ‘I don’t know about that Hali, haven’t you ever seen a grumpy baby?’!!

I think I am getting out of the way of little people and messes. I coped alright for a while but once the two 6 year old boys arrived and the whole noise and boisterous levels increased ten fold I turned into a Boadicea and ordered all of them to clean up and then get outside to wear off their energy in the wide open spaces – they hurridly disappeared

I have spent most of the day in and out of the study.
I was getting paper work sorted and desperately trying to find some important papers that have gone missing.
I still have not found them but at least my office is much cleaner and tidier.

Alvaro from Chile and Winnie from Taiwan arrived around 4pm – they had gotten side tracked along the way so were much later arriving than they had planned. So they spent the rest of the afternoon exploring.

After dinner tonight Azzan asked Bernadette to read to him so she read umpteen stories to him and Mahalia.

Of course there was more Amelia Bedelia

Tim was engrossed for quite a while with Alvaro and Nicholas talking over the atlas. 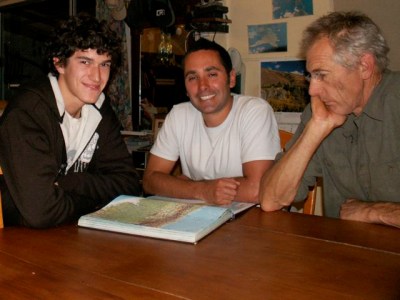 And Chi and Winnie happily chatted their way through the enormous pile of dinner dishes.

It is fun having a united nations team here – and none of them are from the same country for a change!

PS – my reference to Boadicea comes from our history lesson from Nathan tonight – she was the Queen of the Iceni who fought the Romans in Britain. A woman to be proud of!!

“After having dug to a depth of 10 meters last year, British scientists found traces of copper wire dating back 100 years and came to the conclusion that their ancestors already had a telephone network more than 100 years ago.

Not to be outdone by the POMS, in the weeks that followed, Australian scientists dug to a depth of 20 meters, and shortly after, headlines in the Aussie newspapers read: “Australian archaeologists have found traces of 150 year old copper wire and have concluded that their ancestors already had an advanced high-tech communications network 50 years earlier than the Brits.”

One week later, Maori TV reported the following: “After digging as deep as 30 meters in his backyard in Te Kuiti, Hone Waiata, a King Country Kaumatua, reported that he found absolutely nothing. Hone has therefore concluded that 300 years ago Maori had already gone wireless.”

2 thoughts on ““You owe it to everyone you love to find pockets of tranquility in your busy world.””