Tim and Anson got home around midnight.
We know he is home!
The noise levels and physical dimensions increase substantially when he walks in the door

Tim was out on the water doing mussel work by 7am.
He was quite peeved to know that it had been flat calm the day he had to go to town the two days previously had been horrendously windy.
The children and I did school work.
We began at the kitchen table with Maths and Reading – I had carried all my accounts out early with the intention of filing them while supervising the children.
That didn’t happen

Firstly I called up my friend Cassidy in Florida for a chat.
Shanni & Hali chatted with their pen friends Madi-Grace and Sarah-Faith.
That was so funny.
Hali came off the phone saying ‘I couldn’t understand a single thing she said.’!
I had warned the girls to speak clearly and listen carefully cuz they have strong Texan accents.
Cassidy couldn’t understand me when we first talked but now she can – just takes a practised ear.
They think they speak English in America AND they think WE are the ones with the accent!!!

Then I had a catch up chat with my neighbour Sandra – that was good – we don’t do that enough.

Anson arrived down.
First things first.
Measuring up little (well, not so little anymore) bro was paramount.
So  lessons were interrupted…..

Mum had to be measured too cuz Nathan insists he is way way taller than me now – of course I don’t believe that for a moment.

but why does a simple exercise in sizing up each other have to turn into a young bulls wrestling match?

It came to an abrupt end when Nathan’s foot pushed the table and the cups of herb tea flooded all over the books!
Mother was not happy

We ended up down in the school room for the remainder of the morning doing some Shakespearean stuff.
Lunch was late although the children had been grazing though out the morning.
The fresh loaf of bread Tim made for lunch got demolished for morning tea – it was warm and yummy

I tried to get my accounts filed in the afternoon.
I was so tired and stressed that I ended up with my head in my arms crying.
I had a big moan on Tim’s shoulder about how I spend so much time doing bookwork with the kids (which I do enjoy but there is never enough time to really enjoy it because of all the other demands on me) and then turn around and spend the rest of the day doing bookwork for the business – and I get so sick of doing bookwork. There just had to be more to life I reckon!!

I had a long chat with my dear friend Emma and I was able to finish the filing while talking with her.

Anson helped to get dinner ready.
I had put a chicken to roast in the Slow Cooker – it was absolutely delicious.
We gave Anson his birthday presents – his day in the 8th Nov but he was away.

He was being goofy – I found him another hunting book to read.

Despite spending so much time over in the West Island Anson is still a true blue Kiwi –  I found him this towel which he said he is going to hang on his wall.

After dinner Anson took the children up to play rugby.
Not even home 24 hours and he is at it already! 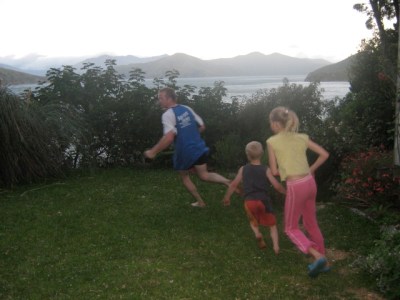 The children love it.
Shanni took the action shots.
I wish I could load the movies she took.
They were priceless – one day I will hook into some nice town person’s broad band to share them with you.

I had to get the accounts finished but I was so tired that I took my book and hopped in the spa.
It had an appropriate title ‘Honor Thyself’ – so I did.
I lay back soaking in the warmth.
When the children finally came down at 9pm I was ready to hop out.
I was not however ready to do the accounts.
So I shut up shop and went to bed.
This morning I was up at 5am and into them.
I have achieved far more in the early hours of this morning that I could’ve done all day yesterday.

Now I only have a phone call to make to sort out some paper work and then I can get them filed.
Today is D-day so I have to get them done or I am in for another penalty fine.

Tim and Anson are off out in the boat to do more mussel work and catch a fish and maybe a scallop or three.
I need to go get the tardy ones out of bed – namely Nathan.
He must be growing, it doesn’t matter how early he goes to bed he is always difficult to raise in the mornings.

Shanni is always up with the birds – literally!
She is up and out sometimes before we are.
She has to go check on all her feathered families in the orchard and the aviary.