I have mentioned our wharf in previous updates.
And it often features in my photos.
It is a huge part of our life as our life revolves around the water and the boats that come and go – including our own.
To fulfil the legalities of the local council we have to have a Resource Consent for the wharf and it has to have an engineers report saying it is safe and up to standard and will last for at least another 15 years.

Our wharf has been standing for many, many years.
Tim has found writing on the breakwater concrete saying 1908 or 1910 so we are presuming that it was built at the same time.
So for 100 years it has withstood the tests of time, boats belting up against it, weather, wind and sea. 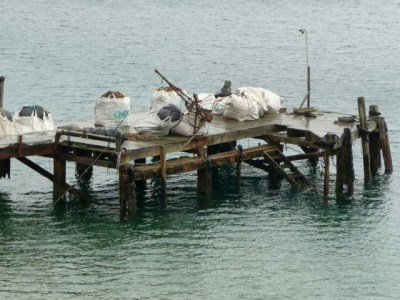 It is now beginning to look rather old and jaded and despite repairs Tim has done over the years it will no longer pass an engineers report. 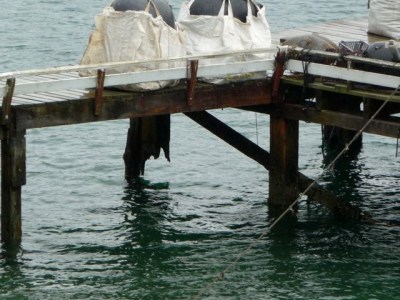 As you can see there are piles which are wearing out and there are boards which are unsafe on the walkway too.
We get some very large vessels in here and huge weights of ropes piled onto it so it has to be able to do it’s job.

So I we have been filling out all the paper work, consulting with a wharf builder and an engineer and trying to keep the council happy while we puddle around getting everything done.
Nothing happens in a hurry so we keep getting letters asking when……

It is getting closer now.
The wharf builder has nearly finished all the necessary paper work and is about to send it to the council.
Got to cross the T’s and dot the I’s or they come back to us wanting more and more information which delays the proceedings even longer.

So in the long run it is going to be cheaper just to buy the piles and get them transported down from the North Island.
Crazy thing is that they are only ‘guaranteed’ to last 30 years.
And they are cheaper than producing them ourselves.
They cost between $250-$600 each and we need about 20 of them!
(There goes my new kitchen for now

The whole process has to be done step by step in time with the council’s demands.
If we go ahead and remove one stick of timber from the wharf to begin demolishing it before they put their stamp on the papers then they will have our guts for garters.

We are going to demolish all the wharf from the woolshed out.
So the piles and runners under the woolshed have to be given an engineers report separately.
He flew down in a float plane and checked it all out a few months ago and told Tim what he had to replace and repair.

Any work has to be done at low tide.
So yesterday Tim & Jan went down and made a start on replacing the piles.

Jan mixed concrete in a half mussel float 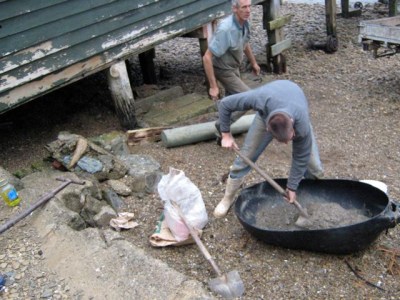 while Tim got under the shed and dug out the old pile and then they were able to replace it and cement the new one in. 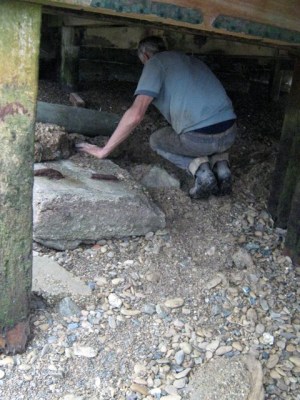 The old pile is lying to the left in the photo below – as you can see it has worn away considerably. 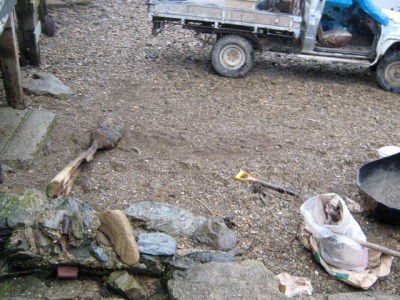 I will keep you posted as it all happens – and yes there wil be lots of photos.
Guarantee that!