Monday was pretty windy.
Tim ended up spending the morning out on the water with one of our mussel company guys, checking sizes and harvestablity of some of the lines.

After a late lunch he headed over the back of the farm to do some more fencing.
He didn’t get back until after dark.
Constantin from Germany arrived in around then and spent the afternoon discovering the place.

We never really got to school cuz I decided it was time to sort out clothes and find sleeping bags and carry bags/packs etc. I got a bit of a system going. Nathan first. He brought all his clothes downstairs and sorted them on the table, deciding what to take and what to wash etc. Then Shanni did hers. Man! The washing machine has not stopped going since we started. I keep finding clothes that have been hiding from the machine

Thankfully I also have a dryer so as we wash, we dry and then pack.

Nathan had several cotton shirts which needed ironing. I told him I would teach him how to press his shirts. ‘What?’ he looked at me with an incredulous expression. Explanation – press means to iron – ‘Well, why didn’t you say so then?’ I showed him how to do one and then let him go for it. He was very proud to be learning some more bachelor skills.

The girls got stuck in and cleaned out Hali’s room looking for clothes and then as promised they did Azzan’s room – seeing as it was they who had been playing in there over past days and had created quite a mess. In so doing they managed to find a heap of his clothes which had been stuffed under his bunk – they all went through the wash too!

Today I managed to get their clothes all finished and began on Mahalia’s and then Azzan’s. Nathan helped by sorting the washing. He was folding Azzan’s clothes when he found a t-shirt which used to be his about 7 years ago! So he had to try it on of course and then ham it up

We ate them for dinner tonight – they were delicious.

Today Tim & Constantin mustered the 2-tooths and then went over the back to do some more fencing.
The weather packed in and by the time they got home at lunch time it was freezing cold and raining. Tim said it was actually snowing up the top

Azzan was in the spa when we realised the snow was way down low just across the bay on Pohuenui. 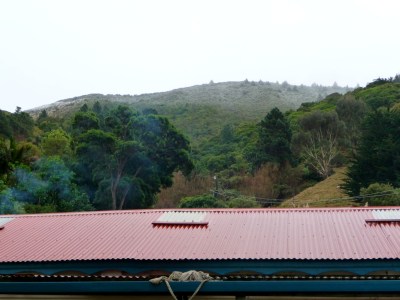 and above Waterfall Bay

As the rain slowly cleared and the cloud began to lift we could see the extent of it. 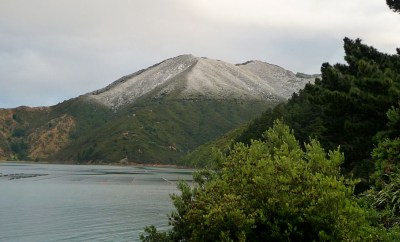 It was also right down into Big Gulley and along West Entry Point on Te Kopi. 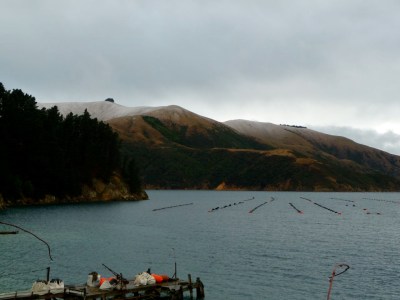 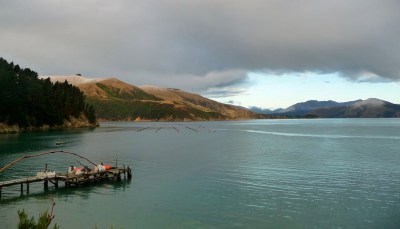 Then the late afternoon sun came out and it looked so beautiful.

One thought on “It snowed – here!! Unbelievable!”