I had a very disturbed night tossing around with a slight fever.
Woke feeling really grotty in the morning.
We did manage to get some school work done while I was making lunch.
Then because I was feeling so bad in more ways than one I started the Chemistry unit I had been promising the kids we would so.
Azzan has been wanting to do it so badly and I have always been putting him off due to other things taking up my time.

I bought the books ages ago because I was so impressed by the clarity and ease of understanding.
They are called Real Science-4-Kids by Dr RW Keller.
I have the Level 1 and Pre-Level 1.
Chemistry was never my forte at school so I am happy to be joining their learning in it.
We did the first chapter in Pre-Level 1 all about atoms and then did some charts on observations.
It was all a bit rushed cuz the guys came home early but the kids were happy with what they did.

Tim and the guys finished fencing early so there would be time to help with the vege garden.
Shanni caught Michael at his favourite occupation – eating 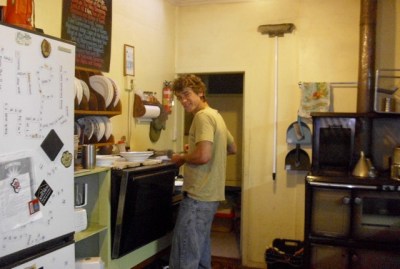 John was quite unwell so he went to bed as soon as they got home.
Conor and Michael got stuck in to the garden with Shanni.
They dug up another load of sheep manure from under the woolshed.
Then that was dug into the beds and then they were covered in pea straw. 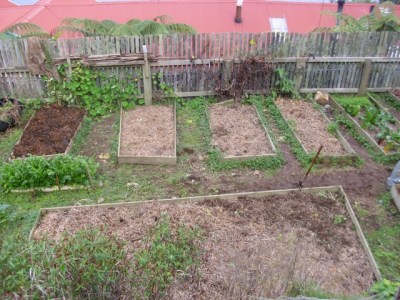 The top garden is getting readied for an asparagus bed. 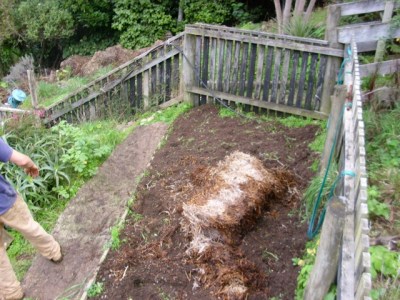 I was feeling really out of it so I went to bed with my book for the afternoon.
I read and dozed for a few hours.
I came to with a jolt at about 5pm.
Raced out of bed and totally lost my equilibrium.
My head was spinning and I just couldn’t get my balance for ages.
I sat in the study to try and get myself together and then went out to get some dinner ready.
It took about half an hour to finally feel like I was okay.

Michael & Conor had gone for a walk through the bush to Waterfall Bay.
They came back very exhilarated by the walk and the bush etc.

I wasn’t up to eating so I watched the guys have dinner.
I had made a coconut cream sauce to go with the grouper fillets.
Apparently it was delicious.

The guys decided they needed to leave and take John to the doctor so I got them to bring all their washing down so we could get it done over night before they left.
They like to save it all up so there was two large loads to put through!
Tim went off to bed after he got the children settled but I ended up talking with Conor and Michael till around 11pm.