Monday
was busy unpacking and getting mail sorted.
Kathryn & Peter had arrived from Christchurch on Friday – they are having a much needed holiday in The Cottage – so we socialised a bit.
The men took off to the workshop and sheds to do bloke stuff like fixing tractors.

Kathi & Christian from Germany arrived on Sunday afternoon.
Kathi wwoofed for us quite a few years ago.
This is the 3rd time she has come back.
It was so lovely to see her again.
Trouble is her stays are never long enough!
They love to walk and take photos so I sent them on a hike in the afternoon.

Following my recipe & directions Kathi & Christian helped me by making a large Malayan Fish Dish for dinner.
They converted it to a very delicious gluten and dairy free version especially for Kathryn

K&C were planning to move on as they have not a lot more time left but when they heard talk of a boat trip they decided to stick around a few more days.

Tuesday
Tim decided the weather was good for a few days out at D’Urville so the morning was spent preparing for their camping/hunting/fishing trip.
’88 South’ left around midday with a full crew.
Kathryn & I stayed back and enjoyed some piece and quiet.

Kathryn cooked a delicious dinner.
We watched ‘Dr Quinn’ while we ate.

Wednesday
I woke at 6am and then went back to sleep.
Was woken at 8am by Sunni calling me.
I was feeling so groggy.
There had been quite a wind storm during the night so I don’t think I slept all that well.
After a shower I managed to wake myself up.
Then I had the animals to feed.
The puppy gets her food 3 times a day.
I had to also feed and water the aviary birds and the rabbit.
It was a lovely day.

Kathryn came up and we chatted and she made lunch.
I made a few more baby cards. 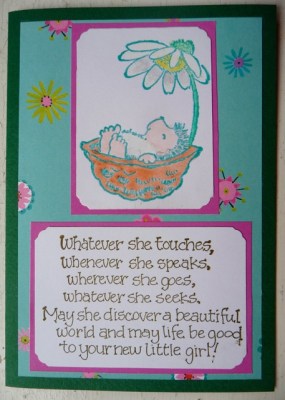 I started transferring more of my pantry foods into the new containers that Graham picked up for me.
I worked quite late into the night to get them all done.
I am so happy with the clean, fresh, tidy & efficient new look

Kathryn cooked dinner again.
We watched ‘My Sister’s Keeper‘.
I had read the book so was keen to see what they had done with it.
Abigail Breslin is a favourite actress of mine and she didn’t fail to impress at all in this movie.

Thursday
I got up quite early and read my book in the spa.
I had a list of things I wanted to do so didn’t spend too long wallowing around.

Got a text from Anson saying that he and Tim had both shot a large stag each.
So they were pretty happy chappies.

I fed the animals.
Cleaned out the old pantry containers.
Chucked out all the rubbish lying about.
Tidied up the living room.
Made a large pot of soup.
Made humus.
Mixed up bran muffins,
Cleaned out Azzan’s room and cleared the Lego off the pile of timber in the school room.
Had just sat down to eat my breakfast and watch Dr Quinn when Graham arrived to work on the bedroom floor.
He ripped up the carpet.
The floor was so rotten.
It was kauri timber and about 100 years old
It should have lasted the distance but Graham said it has gotten damp over the years and the borer has gotten into it.

Old flooring gone out the window and starting to put in the new floor.

All done.
The timber is still a bit wet though so Graham wants it left to dry for a couple of weeks before he nails it down as the timber will shrink.
It is so nice not to break my neck when I walk in there now! 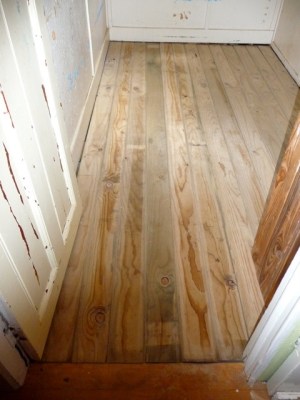 I was getting texts from Shanni saying they would be home around 6pm and they were all tired and STARVING!
In other words, ‘Mum please make dinner for us!’
I have been feeling really tired this arvo and my arm has been really aching.
I didn’t feel like peeling spuds and cooking a major dinner.
So Kathryn helped me cut up a heap of veges for a stir fry.
I cooked some pasta and threw it all together with some cans of tomatoes.
I grated cheese over their plates and the children were very happy with their vegetarian meal.

Leeann hitchhiked in from Nelson and got here about the same time the fishermen did.
Kathi & Christian decided they would drive into the night as they want to make it to Golden Bay tomorrow.
I was sad to say goodbye but glad they had been able to share the D’Urville experience.

Nathan is on his way back from camp as I type.
He is getting a ride in with friends of Glenn’s.
Cat, Sunni & Mat sailed motored cross the Cook Strait today from Mana.
There was barely any wind so they had a pretty flat boring trip over.
They have just arrived.
Seb has gone south to see Phoebe so we won’t see him for a day or three.
Bri & Abby will be here tomorrow night.

The nest is filling up