TuesdayIt was the most gorgeously calm day.The bay was like a mirror.

Mahalia & Azzan helped me get the house cleaned up.We zipped about and got lots done.Azzan decided to move his bed which meant his room turned into a tip again!Mahalia helped him when she could.She shook her head sadly when I asked if she had managed to get him to through anything out.Apparently everything we very much needed

I made some very delicious lemon muffins.Our American wwoofers arrived by water taxi at 10:30am.A family of 6 – 4 children ages 20, 18, 17 & 15.They got settled into The Cottage and then came up for tea and muffins and a get to know each other session.That took a couple of hours.They are a really lovely family from Georgia.About 1pm we decided we should have lunch so they went back to The Cottage and I fed Tim and the kids.Then afterwards the guys helped Tim with some wharf building. 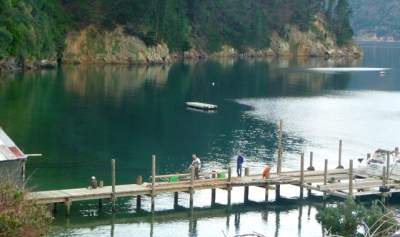 I spent all afternoon cooking.I was wanting to get as much done as possible because I knew I was heading to town Thursday and Mahalia would have to take over for me.I made a pot of vege soup, 2 large fish pies, a beef casserole in the slow cooker, a large meatdish full of mince casserole, butterscotch self-saucing pudding, cut up carrots and onions to go into the casseroles and also extras for other meals, stuffed marrow, made leeks in a white sauce, cut up pumpkins for several meals and peeled potatoes. We ate one of the fish pies for dinner with carrots sticks and mashed potatoes and the pudding.The extra pie went into the freezer for another day

It is always hard to gauge what new folks appetites are going to be so I like to over cater to be on the safe side.It never goes to waste!We had a lovely evening playing talking and the kids plays cards with Mahalia & Azzan.They went to bed much later than normal because they were having so much fun.

WednesdayAzzan was vomiting most of the day so he stayed fairly quiet.Mahalia was also very quiet but she didn’t start vomiting until later in the evening.It seems that young Levi was rather generous with his tummy bug before he left

Azzan really didn’t know what to do with himself.I wanted him to lie quietly but he was very restless.I did manage to get them both off to bed before we had dinner although that’s when the bug hit Mahalia and she was back and forth to the bathroom.Thankfully they both slept through the night and woke feeling somewhat better in the morning.The girls spent some time weeding the flower garden.The men worked on the wharf.I made a large carrot cake and a fruit crumble – both would last for deserts for several nights.I had the large dish mince casserole in the outside fridge on the bottom shelf.Decided to put the beef casserole in there too as it wasn’t going to be used for another day.When I put it in the shelf collapsed and the container crashed down on the other one and that shelf collapsed too.I managed to catch it all but lost quite a bit of the beef casserole.I held it all up and yelled for Mahalia to come and help me.We cleaned up and saved what we could.She took parts of the fridge inside to wash them.I got the high pressure hose and opened up the wash house doors and water blasted the mess!!Cleaned out the fridge and then proceeded to clean down all the concrete outside the back door.It took a while.I needed to stay out of the kitchen!!Mahalia had cleaned the fridge shelves by the time I got back inside.I then repacked the inside fridge and put everything in there – it has stronger shelving.That was a drama I really didn’t need

My day had been going pretty good till then.Just before this all happened Tim took the wwoofers out fishing.So for dinner, instead of the roast beef I was cooking, we had fresh blue cod.It was delicious.We had it with roast potatoes and pumpkin, stuffed marrow and leeks in white sauce.All the veges except the spuds, were new to the Americans!They enjoyed them all immensely.It was a much quieter meal without our two.

Thursday
The weather has taken a turn for the worse again.It is cold and very windy.Azzan & Mahalia were feeling a bit better this morning.They enjoyed flat lemonade – still not much appetite.I packed up for town.Tim changed the filter on the Terrano.Once he was finished I loaded up with some stuff for Phoebe & Seb’s house and left soon after 11am.It was a very windy trip out.I caught some very strong gusts on the ridge tops.Nelson wasn’t quite so bad and it was a bit warmer.I dropped my gear off at the house and then took the Terrano out to the auto transmission guys so they could check out what was causing my gears to malfunction.I picked up Nuana’s car to use while they were doing that.I only managed to get a couple of jobs done out in Richmond before they called me up to say they couldn’t fix the problem and I would have to take it to an auto electrician.So I took Nuana’s car back and picked up the Terrano and buzzed back into town.Got the library books sorted and then headed to my 4pm appointment with my counselor.
That went okay, I have a lot of stuff to process and am really trying to work things through.
Today I felt like I didn’t make a lot of progress, slightly frustrated.
Maybe it’s time I had a change?

I went back into the city centre from there.Just had time to dash into Farmers and catch the toy sale.We needed a new set of Monopoly Deal as ours is getting very worn out.They were such a good price I bought two packs plus a couple other card games that looked fun.They are selling for $20 a pack in Paper Plus & I go them for $6.99 in the sale – too good a bargain t miss!!Sasha biked in to meet me.She pulled her bike to bits and chucked it on the back seat.We went and spent a couple of hours over dinner at Plan B.The food was good and the company was great

After we had eaten our fill and talked enough I took Sasha back home and left stuff in their freezer before coming back to the house to sleep.
I am all by myself tonight.
It is really nice to have some quiet time just on my own.

I talked to Tim and heard that Mahalia did a brilliant job with dinner.
She got all the vegetables cooked in time and the casserole heated.
Apparently the carrot cake was a hit and dinner went very smoothly.
She is becoming a great asset in the kitchen