I slept in till after 8am.

Bri, Nick & Abby were blobbing over breakky with their laptops so I just had a shower and chilled until it was time for us to don our glad rags and head off across city to Villa Maria College where the presentation of the Duke of Edinburgh’s Hillary Gold Awards.

The ceremony was formal and yet friendly. I was uber impressed by Sir Jerry.

There were 4 special needs young people being presented and he was so lovely and caring with & for them.

The ceremony wasn’t too long and afterward we all enjoyed a delicious afternoon tea.

I was ravenous by this point so doubly enjoyed the very interesting mini club sandwiches and savouries. 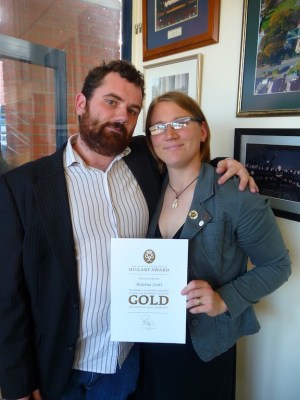 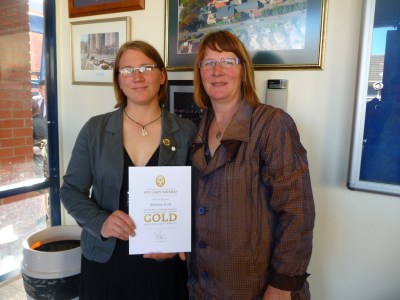 The young folk were ready to leave before 3pm so we ducked away and drove to Riccarton Mall to do a tad of phone shopping.

Bri needed a new phone so Nick was sussing that for her.

I made tracks to the 2Degrees shop to see if they could help me sort out my new iPhone.

The young lass got the phone set up in literally 5mins – I had been struggling with it for a week!!

So then I was happily on my way.

Met up with the others at Gloria Jeans and got drinks.

Then it was a quick trip into Farmers and we were off to the airport.

They dropped me off and I had just a comfortable amount of time to relax for a few minutes before boarding.

The flight back to Nelson was very quick.

I left behind a gorgeous hot autumn day in Christchurch and arrived to a wet bleak coldish Nelson.

It took a bit of finding – after walking around the long term carpark in the rain desperately searching then some phone calls to the guys who couldn’t hear me over the noise of the bands and I couldn’t understand at my end – I eventually got to my Terrano.

They had parked it in the short term park with only enough payment for 2 hours.

Am so glad the meter wardens were not on deck as they would’ve stung me heaps or towed it if they had found it there 2-3 hours after the meter had expired!!

I hopped in and drove across town to Founders Park to join troops at the MarchFest.

I changed my town boots for sneakers and donned my hooded woolen coat as it was quite wet out, and made my way in to find everyone.

They were all milling under cover in the music tent.

We hung about and talked and then I went to find some food.

Sasha grabbed my hand and pulled me through the crowds till we were right at the front.

We stayed there for the rest of the night.

It was really cool to be so close to the action.

We listened to the last half of the John Cooper Clarke performance.

We weren’t that shook up over him but there were a lot there that were obviously enjoying it. 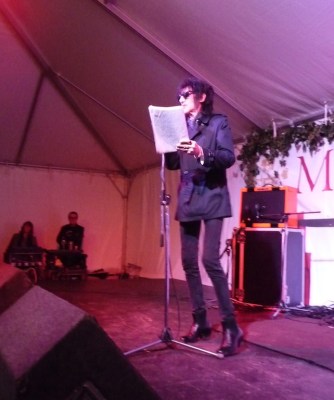 Then on came the group we were all waiting for.

Aurora Dawn came on first – she has a great voice 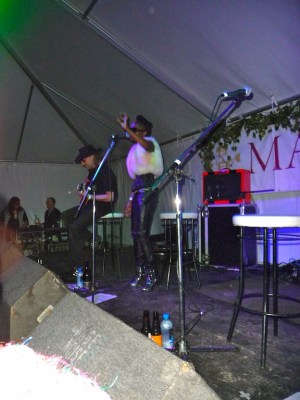 Then Nick Reynolds who was amazing on harmonica and jewsharp as well as vocals.

And Rob Spragg the main vocalist with the wonderfully deep gravel voice along with Mark Sams on guitar. 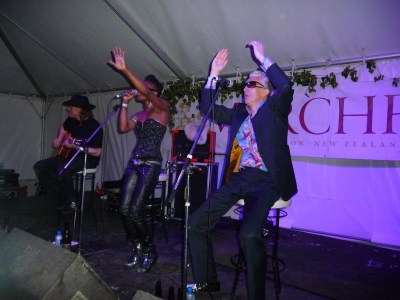 They also had another addition.

A young Kiwi lad that they met at Womad who so impressed them with his guitar playing that they invited him to join the group.

Man! Could he play the electric guitar!!

“Woke Up This Morning” – was of course a favourite number with everyone.

I stayed up front until the last song and then pushed my way out the back.

It certainly was an experience.

But this was quite different!

They came on again and did 2 encores – finishing with my absolute favourite song,

I couldn’t find any of the others so I was texting them all.

Finally got a reply saying they had all gone into town.

So I drove in to find them and then discovered that Sasha had been left behind.

David & I went back to get her and then decided to go back to their place, they’s had enough.

Seb, Phoebe, Nathan & Johannes had gone home by this time and Anson, Gavin & Marah had all gone clubbing but it was 11pm already so we called it a night.

We hung out in the kitchen and had a feed and talked until about 1:30am.

It was a good night.

Certainly a long day and and one of very varied experiences

One thought on “Saturday 24th March”