I woke up at 6am, checked Facebook and emails on my iPhone for half an dour and then went back to sleep.
Woke with a start at 8:10am!
I was due to pick Jacqui up at 9:30am so I was up and into action.
Ironed my dresses while I chatted with Christine.
Then out the door and over to pick up Jac and we went out to Renwick for a tour down memory lane.
I drove past her old family home and then we meandered around the town trying to remember where old friends and neighbors lived and then we stopped at my parents home.

Nothing much has changed there except the foliage has increased in size so you cannot really see much of the house without being totally nosey!

This is the site of the early cemetery.

When we moved to Renwick in the mid 1960’s it was pretty run down with only 1 headstone still standing and the rest were all fallen and broken.
I went round and recorded all the names and dates and the local council made this memorial stone from that information.
Then they cleaned up the cemetery and replaced the mess with this stone. 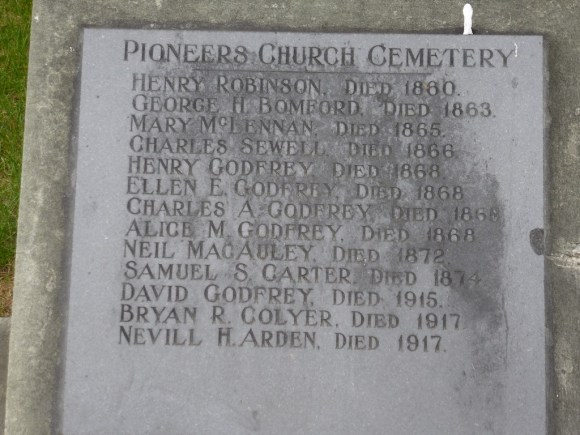 My parents had a deal with the council that they would plant and maintain the land in exchange for the use of it as it was adjacent to their property, so because of that it is now a lovely park area.

We then drove through the town and eventually ended up at The Vines.
It is a lovely wee tourist mecca.
I especially love The Quilters Barn.
Since I was last there they have made some changes and the quilting shop is now at the back and is laid out much better.
There is also a lovely knitting section.
I got quite caught up in there and finally made a selection of some wool and a baby pattern book.
This is the person who hasn’t knitted for years getting totally inspired.
Maybe it is something to do with becoming a grandmother!

It was close to midday – I just had time to whizz into the Fudge shop and buy some delicious fudges before zooming Jacqui back to her niece’s so she could get ready to go out for lunch.

I went to Springlands to post some mail and did a wee bit of shopping.
Then I went to find Mathias and Mandy.
I spent a lovely hour or so with them and their 5 day old cute wee boy, Macey.
I am not really a clucky sort but I did enjoy having a cuddle of him.
He is such a delicious wee person.

I was thinking of going to do some shopping but as I drove through town I really couldn’t be bothered so I just drove back to Christine’s.
As I pulled up she and Bailey were about to go see some baby rabbits so I hopped in with them and went for a ride.
We drove to a friends place and Bailey fussed over the baby rabbits – they were very cute.
Then as we were saying goodbye Ken realized who I was and insisted that I came back to his house.
So we followed him and when I got to the door I saw a woman sitting in a chair.
It took me a few moments to realize who it was.
Heather!

An old friend from many years ago who has been working overseas for 25 years.
I had not caught up with her in probably at least 12 years or more.
So that was a real bonus to my time out here.
Christine was very obliging and allowed us time to visit and catch up.
Finally we had to leave as it was getting close to dinner time.
As we were leaving I was talking to Ken’s wife Ann and discovered that she is best friends with another friend of ours – who’s mother we had only just visited 2 months ago in Waimate.

I started my knitting while Chris was making dinner.
Then a friend of hers arrived and while we were talking we discovered she knew my daughter-in-law’s sister very well.
It is a crazy small world around here!!

After dinner I knitted some more and then went over the street to visit with Pat & Jenny.
Jenny went out for a walk as she is training for a half marathon.
I chatted with Pat and Mike while I knitted.
Mike left as Jenny arrived back – it was lovely to chat awhile with her and Pat.
It is just a month away from their 1st wedding anniversary – that year has flown fast!

So all in all it has been a very lovely sociable day.