Woke feeling much better this morning.

No headache and had a good sleep.

I did get pretty upset when I received a couple of emails from our lawyers.

So fed up in fact that I sent a steaming email to them all telling them that I was totally fed up with the mucking about and that I was sick of seeing all my/our money disappearing into the black hole of legalities!
I have been reassured today that they are nearly at the end of the whole process.

Anson took all the wwoofers up the hill.

They spent the morning planting pine trees and fixing fences.

Anson took a major portion of the over baked cake for their morning tea which was good as it seriously needs to be eaten while it is still fairly fresh.

Am so glad it is not being wasted.

I have spent most of today sorting through hundreds of old photos I have on dvds and loading them onto Tim’s FB page.

It has been fun going through all the children’s baby stages.

I am so glad that they are in a sequence because some are very hard to distinguish from the others.

I was still in bed when I heard a visitor in the kitchen.

She was in fine form and happy to be modeling the height of farm fashion.

She had come to pick up some tools for Anson.

He needed them up the hill and it was saving him work time if she took them up rather than him having to come all the way down.

She did that job and then came back to hang out with me.

I zipped through the shower while she was away.

It was nearing midday so I made us a yummy healthy lunch.

It was nice to sit and chat with her.

Then we had a cuppa and I did a big sort through of my clothes.

With her to help me decide what to keep and what to biff I got really ruthless and made a huge hole in my drawers.
Can actually close them now

Still have the wardrobe to do – have already had a minor sort in there so wont be too stressful to do that job.

We were both exhausted from expelling all that energy!

It was a huge help having Marah to assist in the decision making.

I now have two large boxes of clothes to take to the op shop.

They guys all came in for lunch.

I had it heated and ready so Anson served it all up.

Seb & Janis were there too so there was quite a crowd around the table.

I stayed well clear until they had all eaten and cleaned up.

After lunch Aylin did the dishes and then cleaned the fridge and shelves under the kitchen bench.

That took her all afternoon!

Seb and some of the guys sorted and moved mussel ropes from the corner near The Croft and Anson and the others worked on his dog kennel that he is building.

Because he has been busy helping Seb we haven’t seen a lot of him.

Pierre & Etienne waiting to head off to work.

Marah all loaded up and heading homeward. 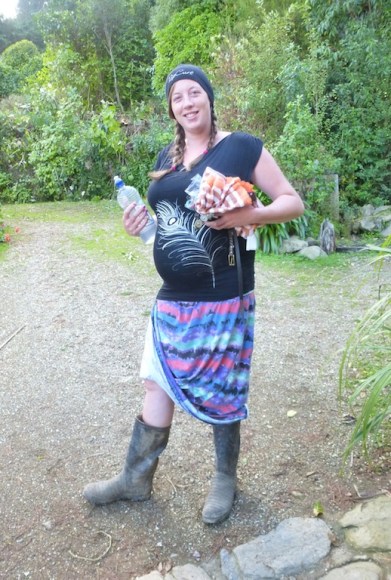 Sebastian came in for a chat before he headed off home.

It has been very windy in here today so no boat work.

They had guests arriving in Lodge today so Phoebe has been busy getting it ready.

Before dinner I was sorting photos so multi tasked and made a phone call at the same time.

I do all my toll calls on my cell phone and it has a loudspeaker so I can talk and do stuff which is really good..

I have a list of folk who have called over past weeks so am trying to make replies.

Just haven’t had enough energy to make the calls.

I really do appreciate everyone who has phoned but the energy needed to return calls is difficult to muster right now.

It is far far more than just dialing the number, it is having the emotional energy to know what to say and how to initiate a conversation.
It is easier to answer a phone call and then talk than the other way around.

Anyway, I began with Christine and I was pleased I had, because I discovered that Tim’s cousin Van & Grant are coming over to NZ from the UK very soon.

I was so excited.

It will be super cool to see them again

I made a coconut cream fish dish for dinner.

Had that with potatoes, pumpkin and the aubergine dish I made yesterday so all very easy.

While they ate I sewed on the buttons to the wee hoodie.

Then I called Phillipa to find out where to buy barley for the chooks.

Tim used to buy it from a private person on the outskirts of Nelson and I don’t know who it was.

But I have just realised that in the 2hours we talked – we actually talked about everything except the barley so I still don’t know where to get it from – duh!