I woke really early, glanced at my clock and rolled over back to sleep.
Then was woken by Jesika several hours later, at 6am saying to me that she had to leave now.
So I quickly rolled out of bed.
Zipped downstairs and gave her as big hug goodbye.
Diane drove her to the airport which I was really grateful for.
This was the view that greeted me as I woke.
Such a glorious morning.
Thanks for waking me up Jesika – travel safe my darling one xxxx 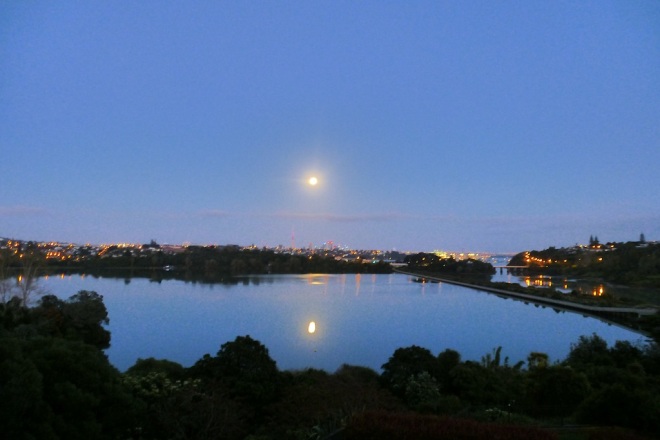 Once everyone was properly awake Diane suggested we go for a walk around the Orakei Basin Walkway which their section borders.
So I threw on some clothes & shoes, grabbed my camera and we were off.
It was a delightful morning for a walk.
We started by taking the steps down first to get the steep bits done first.
The kids were away laughing, way faster than me. 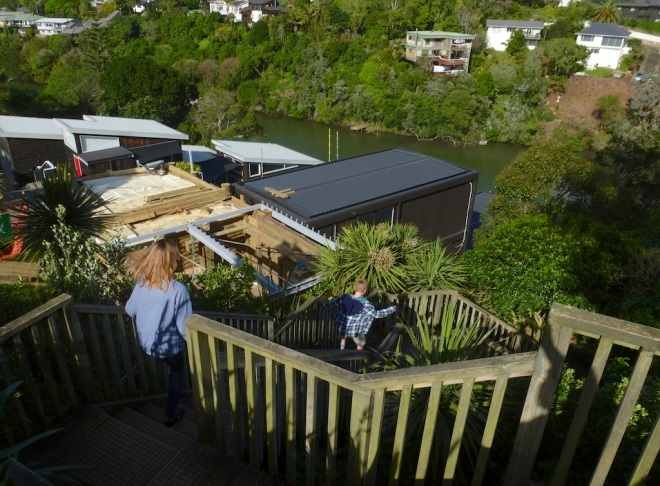 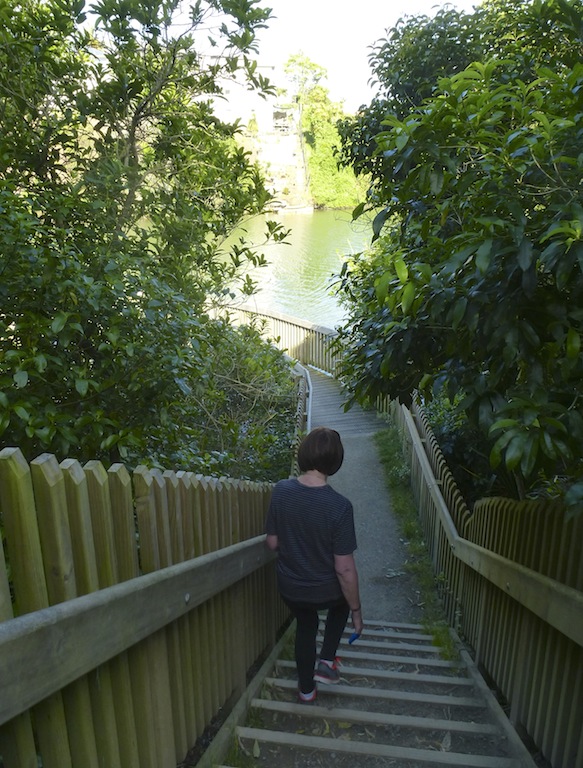 It has been beautifully created and is a wonderfully safe recreation area. 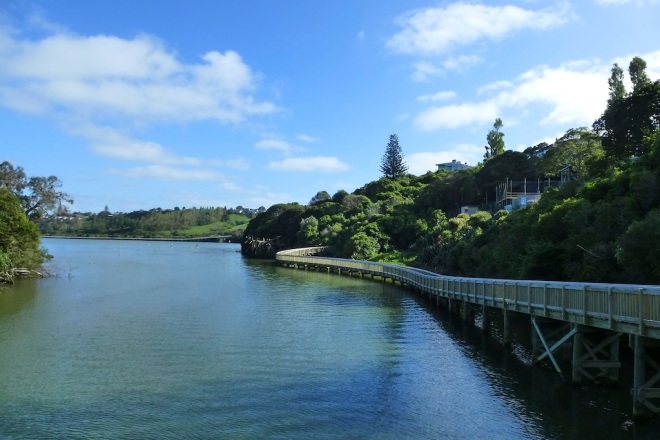 There were a lot of people out enjoying the walkway too.
Running, jogging, walking, walking dogs – lots of dogs, kids biking, 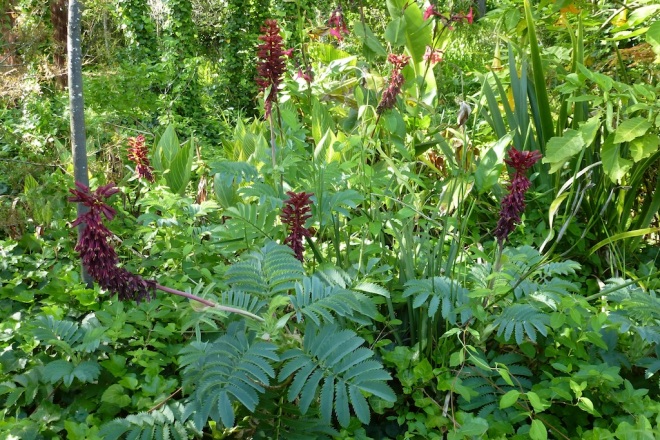 I want to know what this tree is.
I have seen in all over Auckland.

So this building is not apartments or commercial space.
It is a private house in the making.
Personally I think some architects ought to be shot

Fun to watch the water-skiers from this cool jetty

And then to walk out to the end of it, just because. 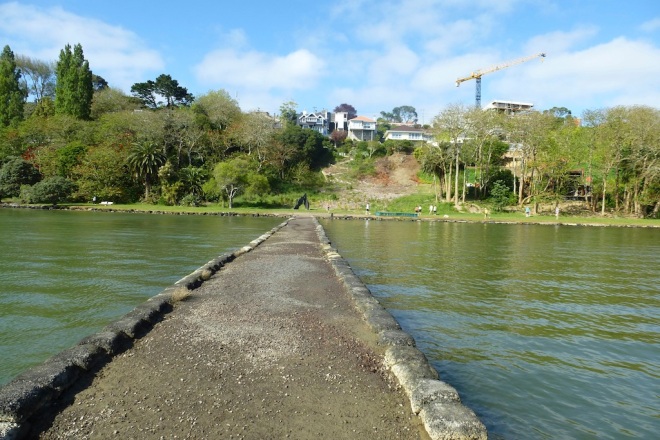 The kids were way ahead but had to wait when the track divided as they didn’t know where we were going. 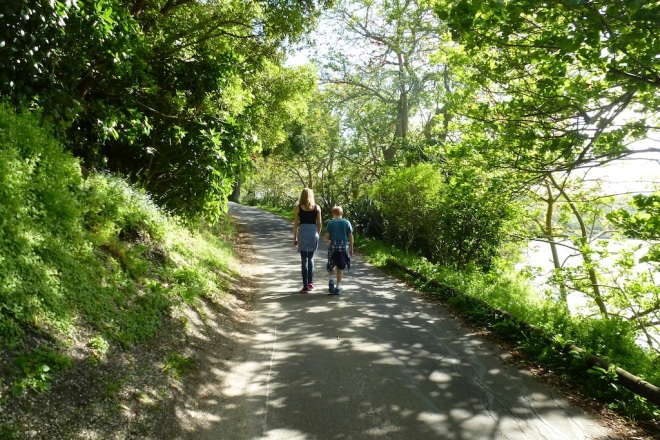 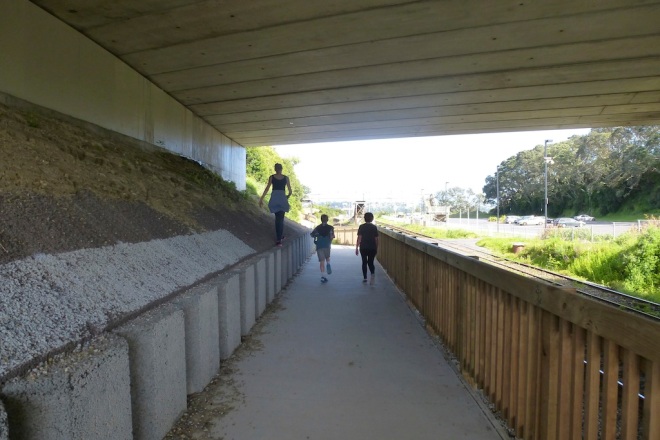 We walked under Orakei Road to the Kings Garden Cafe and had a cold drink.
Best feijoa smoothie I have ever had.
Then we headed back towards the house along the walkway beside the train track.

You can see Wilf & Diane’s house easily because of the tall Norfolk Pine tree beside it, to the left of the horizon. 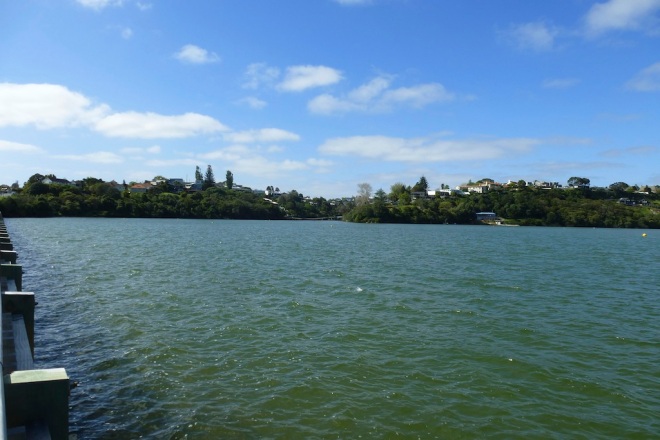 It tucks in nicely with another tall tree behind it.

The Basin is emptied  & cleaned about once a month through these sluice gates. 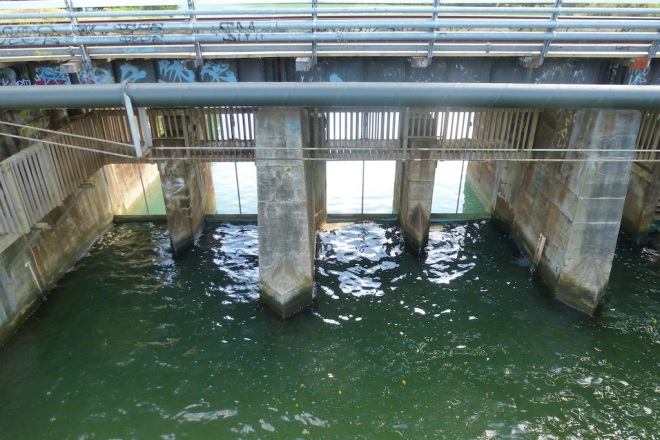 Diane & Wilf’s visitors had arrived so we sat out in the garden and enjoyed chatting over morning tea while the kids sunbathed out the front.
And yes, they did have sun screen on – Diane insisted 😉