A much warmer morning today.
Murray & Sebastian left soon after 6am to go north to pick up Murray’s new boat.
Jesika had an 7am client so she left early too, but she came back to have breakfast with Evan afterwards.
She dropped Evan off at the train and then went to her next client.
Azzan & I got ourselves ready for the day and waited for Phoebe & Sapphire to wake up and get themselves organised.
We loaded the buggy in the boot and the necessary gear you have to take with a baby.
I took the gorgeous girl out to put her in her seat.
Love her new hat 🙂

We had several things we needed so after dropping Seb’s suit in to the dry cleaners we found the Rockingham Mall and Azzan & I ducked in and zoomed through Woolworths and then ran up to the other end to Boost to get some smoothies to take with us.
Phoebe stayed in the car with Sapphie.
It took me a bit of fiddling around but I managed to make the Gamin work and we followed ‘her’ instructions all the way to Kings Park.
Arrived there at 12:30pm, parked up and went to have lunch at the Botanical cafe.
Food was pretty darn good.
Beautifully presented, nutritious & good value.
I ordered Rocket & feta, quinoa, roast pumpkin salad.
They presented me with a huge plateful.
Azzan & Phoebe ordered the Prime beef 180g burger, swiss cheese, beetroot & tomato.
Azzan didn’t want his chips so I intended to eat them as I thought the salad would not be very filling!!
Phoebe ordered extra guacamole & egg and devoured the lot 🙂
Sapphire was sure that the tray of food was for her! 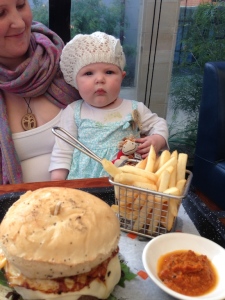 Nathan & Errilyn arrived with the boys just as we were finishing so they went off to have their picnic snack outside.
We meandered out to find them.
Exploring the park as we went.
Fraser Avenue was planted originally in 1898 to honour Queen Victoria’s jubilee.
This replacement avenue of red flowering gums was planted in 1929.

Found the picnickers – what a glorious spot. 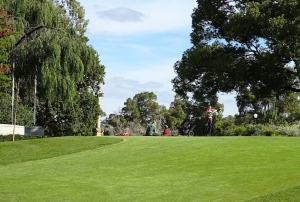 There are wonderful views of the city and Swan & Canning Rivers from the park. 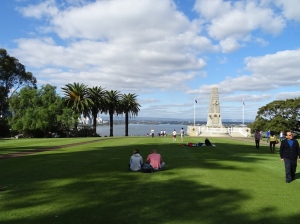 Loads of really interesting flora & fauna are represented in the park.
South-west Western Australia is famous for its unique mix of plant and animal life.
It is Australia’s only global biodiversity hotspot and is of world conservation concern.
This region has a third of Australia’s 25,000 plant species, many of these are found nowhere else on earth. 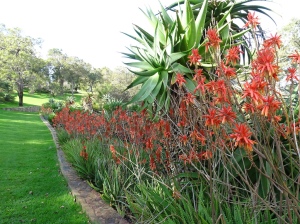 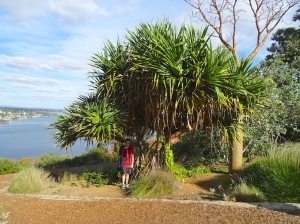 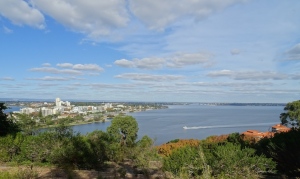 This 750 year old boab tree was transplanted and transported 3200km from Telegraph Creek in Northern WA in July 2008.
The construction of a new bridge on the Great Northern Highway required the tree to be removed so the Gija people of the East Kimberley gifted the Jumulu to the people of WA.

The soft green rolling lawns were so inviting Azzan lay and tumbled about on them.

The elevated walkway and glass bridge is so super cool. 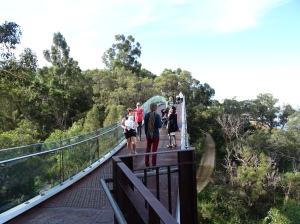 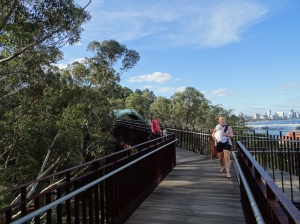 Nathan was in charge of the buggy.
He decided to show us how to transform it into a boys derby cart.
Errilyn thought he needed some assistance in the braking department but she was quickly moved off that duty!!
He went scooting off down the path narrowly avoiding other tourists with Josiah in the rear seat and Malachi trailing behind. 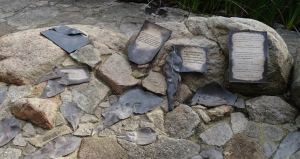 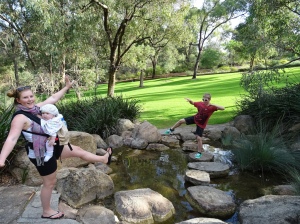 The Pioneer Womens memorial area is so restful and beautiful so www took time to stop and sit and relax and enjoy.
The fountain plays to honour the pioneer women of WA.
The figure symbolises their courage, strength & tenderness.
Mother & child move through the bushland of surging jets towards their destiny. 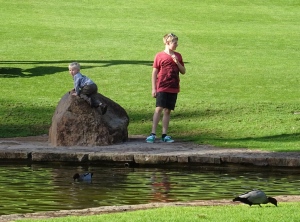 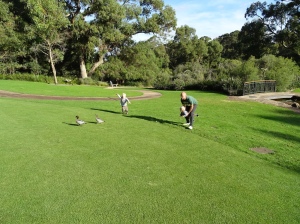 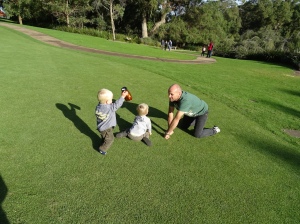 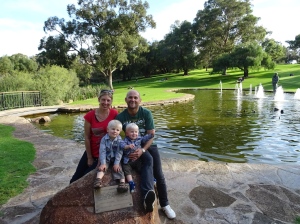 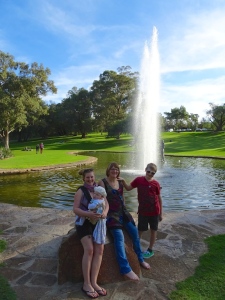 We then meandered back to our cars and drove around to another part of the park.