All is quiet in this house when I get up except the floor boards that creak as I creep out to the living room.
A large older two storey wooden house doesn’t allow for much secret stepping.
But the kids are deep sleepers in the early morning hours so they don’t rouse easily.
Wish they were like that at the opposite end of the day!
I had an hour or two on my own once again before Azzan staggered out looking like death warmed up.
He was complaining all morning about the smell of the wedges I brought home last night.
Apparently when he has his recent vomiting bug it was after he had eaten wedges and now he cannot bear to smell them let alone see or eat them.
Such a terrible mother am I that I forgot this complaint last night when I was so tired and hungry.

He went back to bed, but I roused them both soon after 9am as I wanted some maths done before we left for town.
Azzan got stuck in to his lesson on my laptop while Mahalia & I showered – in separate showers 😉
When I came out he was sitting here very dejectedly wanting my help as he was learning about circles and angles and it was just not connecting.
So I worked through the lessons and he soon was away laughing.
The lesson on types of triangles got him beat for a wee while but by the time we left I think he had them sussed.
My one appointment in town mid arvo had grown to several appointments spread from Nelson to Richmond so I decided to make tracks before midday.
The kids didn’t need to come but they will not let me go to an Open Home without them.
So they had to endure the rest of the day in the car as well.
We zipped straight out to Richmond and picked up the gear Shoshannah had brought out for us.
Then to the real estate agent where I left my phone in the car for Mahalia to monitor calls for me.
That took a wee while but there was no complaints from the kids.
Discovered later that it’s not safe leaving my phone in the car 🙂

Mahalia was making the most of the time to chat with Jesika on my phone as she has today off between day & night shifts.
Then we zipped up to see Ross before driving back into town to the first Open Home of today.
It was such a cute place.
I loved it, location was perfect, the house was really cute, but there was a bit too much to be done and not enough room for visitors, for the price of it.
Then I went to post a heap of the books I have just sold.
That took ages so we had to go straight to the next Open Home.
Well, this one ticked so many of our boxes that the ones it does not tick are overcomeable – don’t think that’s a real word but you get my drift!!
Kids were ecstatic about it.
Time to go away and think, methinks.

We were getting very hungry and tired by now so I dropped accounts in to the accountants, visited with Bedelia for a mo to order some product, zipped into Warehouse Stationery to pick up some protractors to help with the current maths lessons and then we popped over to visit the guys at Chilando.
It’s always good to eat here, fresh food and friendly service and funny customers. 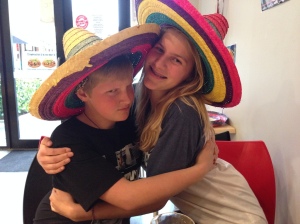 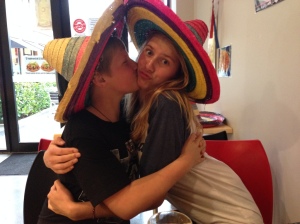 The day had turned very cold and rather damp so we zipped into the car after we had enjoyed our delicious dinner.
Drove across to Countdown to search out the Medjool dates we had been informed were on special.
Azzan baby sat the car and Mahalia & I went zooming around the supermarket filling the trolley with fresh fruits and veges to fill the larder.
We found the dates!!
Then it was homeward bound to unload and crash out.
I have spent the evening updating my blog and selling more books.
It is actually really time consuming, photographing, pricing, loading to site, then keeping track of the purchasers and their questions – whew!!
But great to be sharing the (book) love.

I have been having some very strong twinges in my back today – same area that was affected when I put it out last time.
I called up my chiropractor and managed to get an appointment on Thurs.
It has been very sore today so am hoping it will last till then.
Bought a hot water bottle to try the heat treatment tonight, hopefully that will ease the symptoms,

I am off to bed now as I have an important function to attend in the morning.
Will reveal all tomorrow.
Better put camera on charge before I hit the pillows  😉