Mahalia went off to her 5:30am rowing before any of us were awake.
Shanni woke feeling much better after a 12 hour sleep – whew!
So good for all of us 😉
I was greeted by these two darlings at 8am, bright eyed and bushy tailed, all ready for school.
This will be the last & only year that I have two wearing a school uniform! 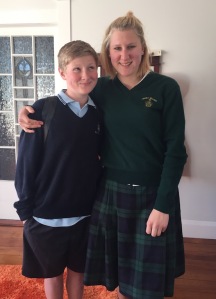 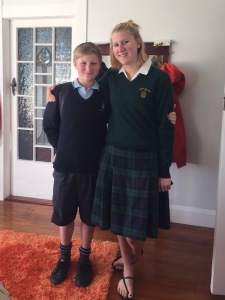 Shanni took the car today as she had things to do after school.
Azzan made lunch for both himself and Mahalia, on her rowing days she only has such a brief turn around to have breakfast and get ready for class.
I was up and ready to do the taxi route.
Mahalia rushed in the door and got ready in about 10 minutes flat.
We were all in the car and gone before 8:30am.
I dropped Nathan off at work, then Azzan at Prep and then on the way back let Mahalia out at NMIT.
I had a brief stop at home to have my breakfast and then I was off to counselling.
Back home to wash the dishes and try and clean up a bit.
Caspian announced Glynnie’s arrival.
She played some games with him in the yard which made him happy.
Then I made a cuppa and we made ourselves comfy in the sunroom.
Beautiful day.
Had the door open and the water fountain turned on.
Sat in the sunshine out of the breeze and wallowed for a while.
Just nice to lie back and relax and chat with a friend.
The kitchen end of the house is the busy part so when I come down to the sunroom I can just stop.
Finally though all good things come to an end.
We both had things to do and places to be.
I was getting some things done in the kitchen when I heard Caspian barking.
Lloyd & Val appeared at my door.
Such a lovely surprise.
But Caspian was nowhere to be seen.
Finally found him in the hall.
He had come in through the sunroom and the wind had slammed the door closed so he was racing up and down the hall alerting me to visitors but he couldn’t get to them so he was getting very anxious.
L&V hadn’t been here before so I gave them the royal tour.
Then realised I had to get moving if I was going to get to my seminar in time.
They needed to head home to feed the stock so quick hugs goodbye and then I scurried about getting Caspian sorted and myself in some semblance of respectfulness to make an appearance outside the gate.
All the kids were busy after school and wouldn’t be home till around 5pm, so Nathan had already taken some food out of the freezer for dinner.
I needed to take dinner with me but was running out of time to make something so I planned to fly into the supermarket on the way.
But as I drove through town I thought maybe a Tank smoothie and salad might do the trick.
Ran in and got a Mega Green smoothie to try and replete my drained physical resources and got a wrap to take for dinner.
Then zoomed out to Saxton Field.
I knew the seminar was at Saxton Oval but I had no idea what that was or where it was.
I got a tad lost and then met another girl who was also lost so we followed each other and managed to finally locate it.
A most intriguing building.
About 50 people turned up for the Safeguarding Children seminar.
It began at 4:15pm and went through till after 9pm.
We had a few short breaks.
There were about 5 or 6 speakers.
The content was very good.
But I really struggled to stay awake throughout it all.
Kept nodding off which was very frustrating.
The first few speakers were women and without a microphone their voices were difficult to hear and also at a resonance to lull me off.
The final speaker was John Parsons who was excellent.
I stayed awake to hear all of his presentation.
He is an  Internet Safety and Risk Assessment Consultant who works with all ages and stages of society to educate us in the dangers of the internet.
The only complaint I would have was that his time was too short and therefore very rushed.
I made a beeline for home as soon as it was finished.
The kids were all in bed but Azzan came out for a hug as I arrived in.
Tucked him back into his blankets and then fell into mine.