I woke at 6am and put a log on the fire.
Heard Raphael leaving around 7am.
He and his friend were heading to Able Tasman for the day.
Mahalia was up before me and getting washing start etc.
Sue came by and took Caspian for a walk.
It was heading towards mid morning by the time I was up but I made up for lost time.
After breakfast I went out to the back garden.
Cleaned off all the rubbish, harvested silver beet and rhubarb, shovelled up three wheelbarrow loads of mulch and spread it around.
Then planted out the spinach and parsley I bought about a week ago.
I was pretty exhausted by the time I’d finished.
Just as I was putting all the tools away Sasha & Arielle arrived.
I was glad to stop for a cuppa.
We chatted until Arielle was ready to sleep.
Then we sampled the Malai Kofta for lunch and then I sent Sasha off to sleep too.
Mahalia zipped up the road to the book fair.
Tommy, Kate & Grace walked past after they had spent up large there too so we had a quick tiki tour of the garden before they carried on home.
It feels like we have a new bathroom.
Not only have I introduced some colour but it is now sparkly clean.
Love it!
Thanks Halia xxx 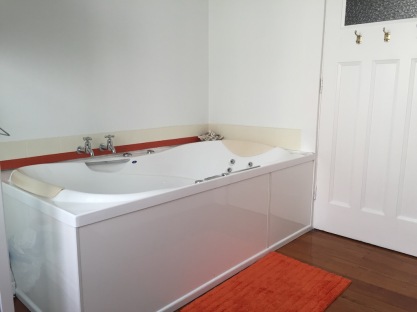 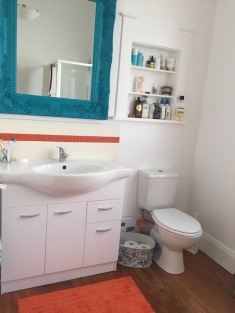 Sasha took Arielle home around 3pm.
I had been battling a headache which was getting worse so I retreated to my bed and had a doze for a while.
Mahalia came in later and gave me a back massage.
It was lovely.
I haven’t had a headache in absolutely ages.
I think I overdid it in the garden because my neck and shoulders are really tight – the typical area for my headaches to begin from.
I was glad that dinner was all ready in the slow cookers.
Couldn’t really think tonight.
After dinner I did a bit of artwork – had some fun creating these two pages. 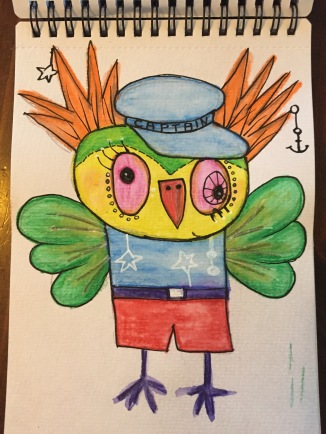 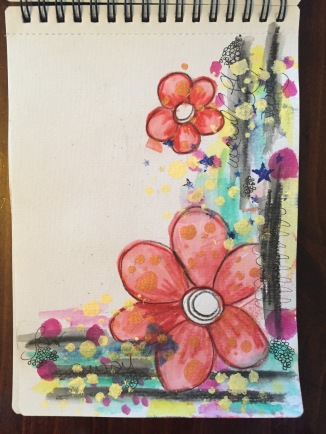 I went to bed and started watching a TV series Shanni had lent me called ‘Suburgatory’.
It is really funny.
A good bit of light relief tonight.