I had told Azzan that I would need to know by 6am if he needed to go out to the Dr.

I had just gotten up for a shower when he came to tell me that he was still very sore and did need to go out.

So with a big sigh & enormous effort I got myself ready and we were away to town just after 7am.

We listed to the audio book ‘Tracy Beaker‘ by Jacqueline Wilson all the way out.

I have heard it before, bit it is a very compelling story, I commented to Azzan it made me think of the movie ‘Boy‘.

They are both about children in unhappy situations, both craving for loving parents, and both creating a reality of their own in their minds so they can endure the life that they have ended up in through no fault of their own.

This is what we woke to.

It was a beautiful morning. 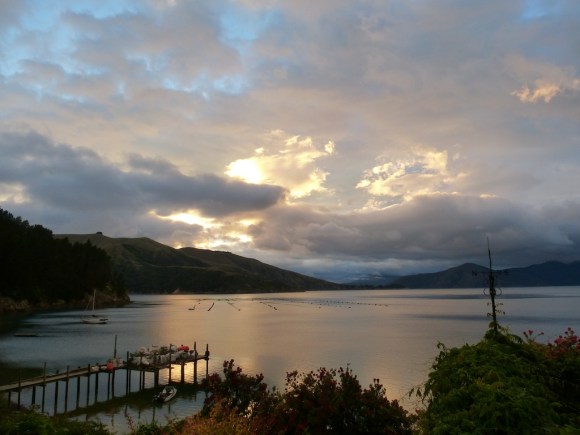 I drove straight to the Dr’s office.

Both of us were starving, but I hadn’t wanted to let Azzan eat much just in case they wanted to do tests.

As it was a holiday I went to ‘The Doctors’ – a new place which was open at 10am.

We joined the queue.

Dr Karl Hellyer was the guy we got to see.

He was really lovely.

After an examination he called up a specialist and had a chat and they both decided that Azzan has epididymo-orchitis.

He prescribed antibiotics, anti-inflammatories and pain killers and lots of rest.

From all I have read it is quite unusual for young boys to get this.

We buzzed off to get the required prescriptions filled and then headed to the market to get a wrap for brunch.

We caught up with Fumio at his bone carving stand.

He said there were masses of people going to and fro but not many actually buying.

It was really hot by this point.

We saw Becky and her girls which was cool as they were flying back to the USA the next day.

Picked up our wraps and pushed our way back through the foot traffic to get to Starbucks.

Azzan’s wrap was too spicy for him so he opted for a toasted sandwich and I got a frappaccino.

Then we headed to the library.

It was about 1pm by this time so we made out way to Richmond.

Just got on to the motorway and met traffic bumper to bumper, crawling towards Richmond!

I was thinking oh bother, not an accident, but we kept moving slowly.

I then heard on the news that there had been an ammonia leak at Wakatu which had shut off all traffic between Nelson & Richmond for several hours.

I was very very glad we had been held up in town and not gotten caught up in it.

We zipped out and did a couple of jobs and then came back into the city to meet up with Nathan at Hangar 58.

I drove via Tahunanui so I could check out some of the secondhand/recycling shops as I was looking for a piece of furniture to use as a bathroom vanity.

I didn’t know exactly what I wanted, just knew I would know it when I saw it.

However, all the places I went to were closed.

Nathan was not starting work till 4pm but he had gotten there a couple of hours early and was chatting with the Winnington family who were having a few afternoon drinks there.

We all had a lovely catch up.

Margaret gave me a couple of ideas of where to look for the bathroom furniture I was wanting.

I had 15 minutes until the shops all closed at 4pm.

I was zipping along Hardy St when I saw ‘Eclectic’ was open and there was a park outside so I crammed the Terrano inelegantly into it and ran inside.

Did a quick sight tour on the ground floor as I headed to the stairs.

I had been told there was lots more to see head upstairs.

I quickly checked everything out but couldn’t see anything that really caught my eye until I got to the very back corner room. 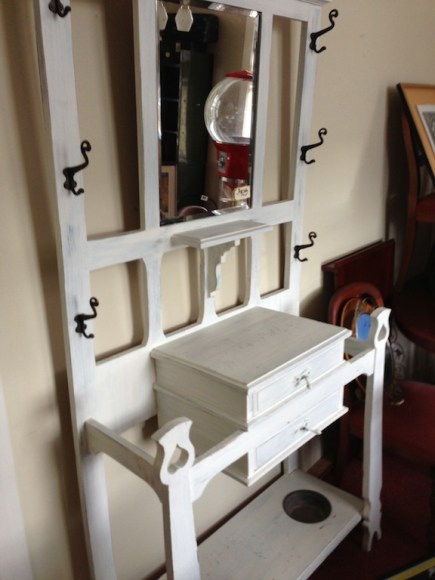 That was it!
Absolutely perfect.

I ran downstairs to tell Maria what I wanted it for and she came up with me and we scouted to make sure nothing else would work.

I commented that there were two other pieces the same price which might work but I didn’t like them as much.

Then she told me that the hall stand was in the half price room!!
Yee ha!
Brilliant.

I was over the moon.

I went and measured up the Terrano.

Moved the stuff in there and lay the back seats down.

Her guys managed to just fit it in with a few inches extending on my headrest which I did bang my head on several times, but as they say – no pain, no gain!

We went back to have some dinner with Nathan.

He had begun work by this time but was able to serve us which was nice. 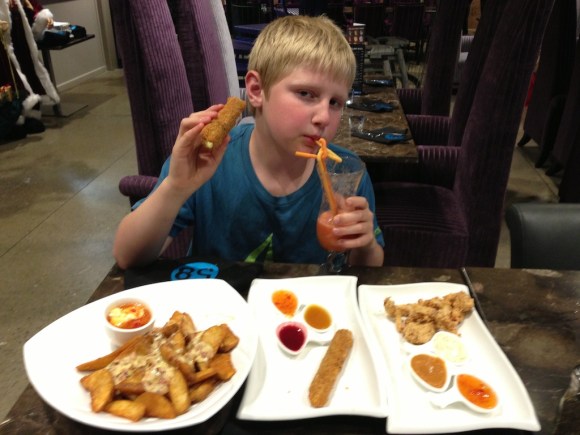 Azzan was hungry but couldn’t make it through his meal so we doggy bagged it and headed home around 6:30pm.

Tired but very happy with my wonderful find